Oliver greeted me this morning with one eye closed. It appeared as if he had been rubbing his eye quite a bit as the fur around it was gone. He's done this before and after awhile it gets better, but this time I thought I might take him next door to the vet to get looked over. I also wanted to inquire about Prozac (to stop the spraying), to get him microchipped and a nail trim as his claws were razor sharp.

Getting him into the cat carrier went fairly easily as he hadn't been acquainted with one before. I baited him with some nip, when he was mostly in I pushed his butt inside and zipped it up. For sure he didn't like it and he told me all about it.

I made the point to warn the vet staff that he was a friendly feral but he would probably wouldn't be showing his friendly side. When the vet tech came in to take his vitals and clip his nails all by her lonesome I thought she was crazy. As she started to unzip the carrier, I felt my heart in my throat as I envisioned blood flying after Oliver bit and scratched up her arm. 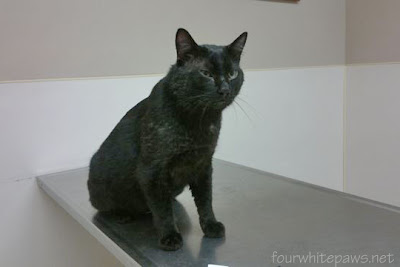 Oliver decided to make a complete fool of me! He was completely friendly. He let the vet tech and the vet do whatever they wanted to him and he didn't protest at all. Claws were trimmed, temperature taken, eyes examined - it didn't matter what was happening to him, he was kitty putty.


After a few minutes he even rolled over on the table and asked to have his tummy rubbed! 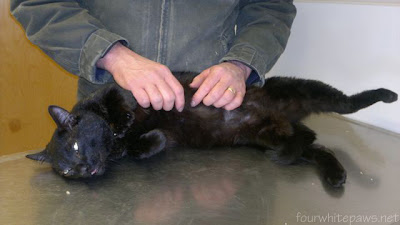 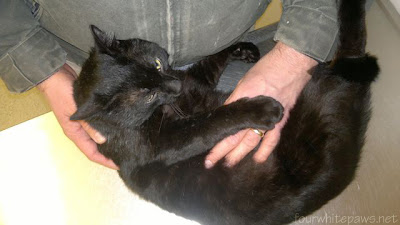 Who is this cat? What did you do with my Oliver?!

Oliver was better behaved than some of my indoor cats. I was thrilled to see him so easy going. He's such a great cat, sure would be a great indoor cat. When it was all over, he came home with a microchip, Prozac and some drops for his eyes. He doesn't spray very often these days, but some spraying is still too much. Hopefully the Prozac helps him curb this habit so he can come inside. I also picked up some Prozac for Buddy too.

When back home, I treated Oliver to some nip. He sure loves his nip! 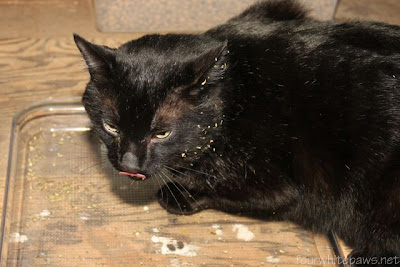 With Laura's help, I moved Oliver's guest house into the enclosed back porch. With his heating pad inside the guest house. Hopefully he stays warmer this way, although it makes it harder for me to look out the back door window and see if he's on the porch. I might end up building him a little enclosed spot up on the wall. 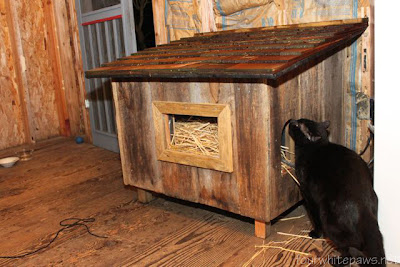 After it was all over, I had a pleasant feeling inside, like we are a few steps closer to possibly getting Oliver to be an inside kitty. Seeing him so lovey and sweet at the vet sure made me think he would make an excellent inside kitty.
Posted by The Cat Guy at 1:40 AM