It was two years ago yesterday, when I first reviewed Sticky Paws, a product that is intended to deter cats from getting on or scratching surfaces. My first few attempts at using this product were complete fails. None of the indoor cats were deterred, they had no problems walking on a sticky surface. They even turned it into a toy!

Since then, the remaining product has been sitting on the shelf collecting dust. It occurred to me last night that maybe this product would have an effect on Oliver. I've been wanting to deter him from jumping up in the window and getting Buddy all stirred up. So, last night, I got my Sticky Paws, went out and applied two strips to the outside window sill. Of course, as I was doing this, Oliver was at my feet in the yard. Upon completing this task, I made my way back inside.

Once back in the house, I was greeted with the shrieks and snarls of Buddy trying to attack Oliver through the window. Oliver didn't waste any time proving to me what a completely worthless product Sticky Paws is. Maybe others have had positive experiences with Sticky Paws, but thus far all six of my cats have not been deterred in the least by stepping on a sticky surface. Time for me to repurpose the double sided tape into something that is actually useful. 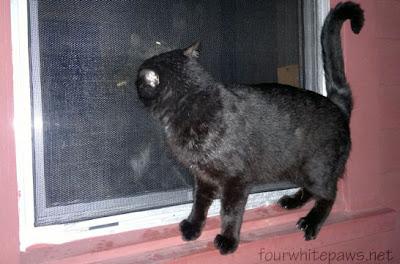 Oliver, antagonizing Buddy while standing on the Sticky Paws strips 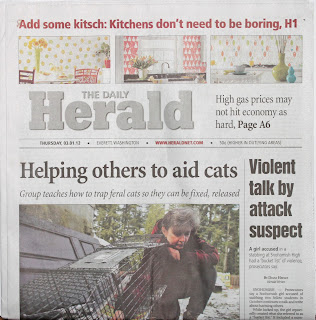 My local newspaper published a front page article in yesterday's paper on the grassroots Community Cat Coalition, the TNR group that I have recently connected with. Nancy, my TNR mentor, is featured in the story. There's also an unnamed reference to Oliver and his family!

TNR on the front page, I think that's pretty awesome! I'm pleasantly surprised to see that the comments people left on the news article site are actually supportive. I hardly ever read what people have to say in those comments anymore because they are usually overly negative and antagonistic.
Posted by The Cat Guy at 9:00 AM