Max loved his yardtime. When he heard the jingle of the harness and leash he would come running - he knew that soon he would be out in his yard, sniffing and rolling in the grasslike the big tough outside kitties. He never tired of taking excursions into the wild. 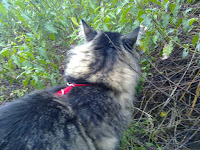 Today was Nahum's and Willow's first excursion in the yard. Nahum got first shift - he was a little put off by the harness and leash at first, but soon the adventure consumed his focus. He sniffed in motion and thus covered a lot of ground. When it came time for his turn to end, he firmly protested. 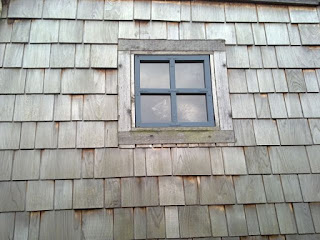 Willow watched longingly through the window while Nahum explored. When at last it was her turn, she was scared at first, but after some time under the large planter her curiosity took over and she was off. She very meticulously explored her new world. I was struck by how naturally and beautifully Willow interacted with the wild. 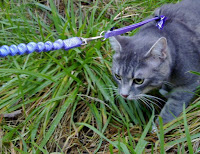 For the remainder of the day, Nahum was glued to the windows, gazing out at his newly discovered yard. It seemed that he desired more than anything to take another romp around the yard. If the dry weather holds, he may get another opportunity tomorrow.
For me, this yardtime was a mix of fun and sadness. It was a delight to see Nahum and Willow so alert and engaged as they experienced the big outdoors. A feeling of sadness and loss also stirred in my heart, as I remembered many of the wonderful yardtime memories that Max and I shared.
Posted by The Cat Guy at 10:43 PM