I don't think I realized how depressed Nahum has been until recently. I think it began when we took Rose in. Nahum was used to having alone playtime, where he could be completely silly and get lots of loves. He seemed to feed on such energy.

Rose, being a kitten, thought play was for her, so she would freely take over any play session. Nahum would slink off to the side and watch her steal his toys. He became much more reserved than he had been. I would try to get him to play and he might for a minute but when Rose appeared he would slink back.

A few weeks ago, as I posted in Feather Toy Play Time, I started taking Nahum upstairs to the bedroom for some alone playtime. After about a week of doing that, he has become his old self again! Now every time someone goes upstairs, he darts up the stairs to the bed, expecting it to be Nahum-alone playtime! 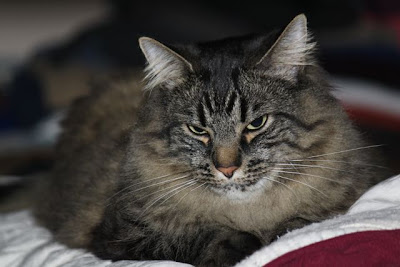 We play string and feather on the bed and he loves it - just like old times. He has become so much more energetic, more confident with his tail always held straight up. He's back to dragging his string over to me and asking me to make it move. When he is on the bed, he is now very generous with head butts, as if he is thanking me. If he is not stalking the string, then he is flipped over wanting his fluffy belly loved on!

I love having my Nahum Fluffer-Nutter back!
Each cat develops their own routines. Now that Nahum always follows me upstairs, I see Theo feeling dejected because his morning routine is being intruded upon. Every morning as I was getting dressed for the day, Theo used to quietly climb the stairs and hide just around the corner. Then at the right moment in just a flash, he would bound from around the corner onto the bed and onto my shoulders! He always tried to surprise me by his speed! We would both get a good laugh as he purred and snuggled in. The last time he tried his routine, he found me petting Nahum on the bed and he stopped mid-routine. He hasn't tried it since. I miss his burst of silliness.
I'll need to figure out how to meet all their needs, which will probably require me to quit my job! Trying not to disappoint four cats with vastly different needs is probably impossible, but after seeing the effect on Nahum of him not getting his greatest need met, I am inclined to try harder.