As part of Buddy's integration process, I swapped out the cat's space for the evening. Willow, Rose, Nahum and Theo got to sniff out the bedroom where Buddy has been living and Buddy got to explore the whole downstairs of the house.

Buddy started by pacing around the house cataloging everything with his eyes and nose. After he made a few laps around the house he then started surveying vertically by climbing up on stuff. He particularly liked the porches where he gazed outside. His attempts at opening the back porch door with his paw tells me that his previous owner may have been less than truthful when she reported that Buddy was an "indoor-only" cat. Buddy might eventually need to be fitted with a collar and tags in case he escapes. 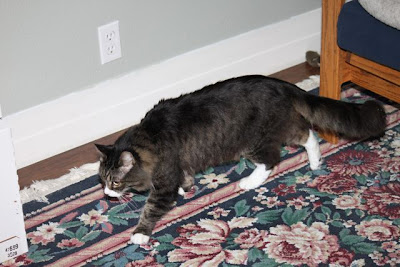 Buddy explored every corner of the house. 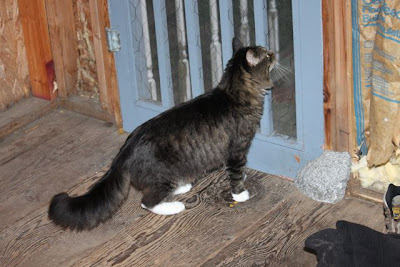 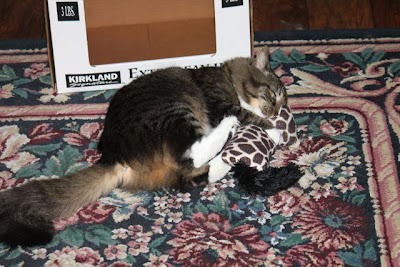 He hasn't expressed much interest in toys, however he couldn't resist Theo's Kickeroo! 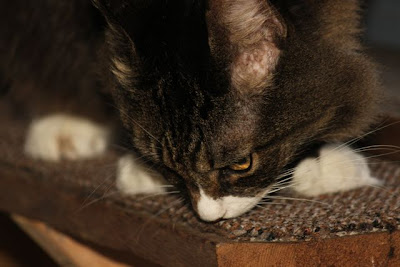 His little nose had to be tired after all that sniffing!
I would like to have Buddy be comfortable in the downstairs when he meets the other cats, that way he is not meeting unfamiliar cats in completely unfamiliar surroundings. Hopefully, if all continues to go well, we will try full integration over the weekend.
Meanwhile we continue to discuss Buddy's name. His name came from his original owner, so he has had it for all of his life, but we don't think it really fits him and we use 'buddy' as a nickname at times for the other cats. So, we contemplate changing Buddy's name, but can you do that with a 12-year old cat? We were trying to think of names that may sound like Buddy so as not to confuse him too much.
Posted by The Cat Guy at 9:25 AM

Email ThisBlogThis!Share to TwitterShare to FacebookShare to Pinterest
Labels: Buddy