At around 6:45am this morning first contact with BK was made. I had envisioned first contact involving a few quick pats followed by a hiss and BK running away. Delightfully, I was wrong. 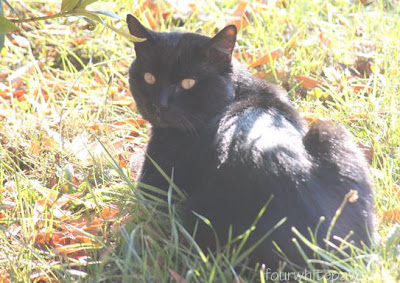 My efforts to trap BK have been unsuccessful thus far. I had high hopes for Monday morning being the day, as Laura was home from work, which offered me the bonus of emotional support for the trapping process and while at the vet. However, the local utility trumped my plan when they showed up early in the morning in the alley with lots of trucks and equipment and started their all day noisy operation on the overhead wires. BK never went after the tuna in the trap.

Fall is here. As the nights have been getting colder, I have been warming up BK's wet food as a treat for him. I can't tell if it makes a difference to him, but I like giving him something warm on a cold morning. Usually, he is either waiting for me by the back door or he waits in his warm home as long as possible and comes out right when I plunk down the food bowl.

This morning, he started to come over to the Dining Hall when I placed the food bowl down. I decided to wait to see how close he would get. He didn't hiss as he walked right up to me, entered the Dining Hall and started attacking his food bowl. As I watched him eat in the dark, I slowly reached out and gently petted his back. I was nervous as I didn't fancy a bite! He didn't have much response either positive or negative, so I kept petting him for a bit. I paused for a few minutes then started again.

After breakfast, he sat about a foot away and cleaned his paws. He then looked at me and meowed. I took this as an invitation and slowly reached over to him and that's when it all started. BK melted into a love bug. He wanted to be loved all over at the same time - his back scratched, his head rubbed, lots and lots of purrs. He rubbed his body and face against me marking me as his. At one point it even looked like he was starting to roll over to have his tummy rubbed, then he stopped himself and offered more of his back for pets. He even asked to climb in my lap. After about five minutes my knees were screaming at me for having squatted for too long, I had to move and I didn't want to push my luck.

As I was loving on BK, I wondered how long it had been since he had been lovingly touched by a human. The obvious answer was too long. He soaked up the love. I hope that maybe in time he'll let me pick him up and I can carry him over to the vet for a check-up rather than both of us being traumatized by the whole trapping process. That would be better for all!