Buddy's integration process continues. This morning I introduced him to Willow. That didn't go so good as Willow hissed and hissed. She followed him around and hissed at him wherever he went. Sweet Willow quickly became the Willow Monster which didn't make me happy. I started to really question our decision to bring Buddy home.

I tend to project a lot onto Willow and when she doesn't live up to my anthropomorphized projections it sends me into a tizzy. I need to remember she is a cat rather than little human in a cute cat suit - easier said than done. 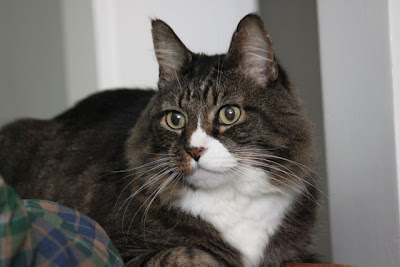 In the evening, I decided to let Buddy mingle with the general population for the first time. The tension was high, all of us were on edge. Nahum is so sweet, he cautiously yet curiously sniffed Buddy and then quickly warmed up to him. Theo said a quick hello then didn't pay much attention to him after that. Willow continued to hiss but at least she didn't follow him around and torment him. Buddy decided to just ignore Willow, a wise move.

It didn't take too long for Buddy to relax in his new home. He found a perch on the back of the chair in the living room and hung out and watched the other cats mill about. 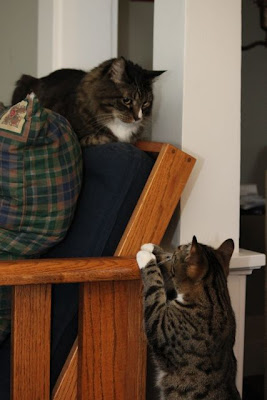 Rose was filled with cautious curiosity. She wanted so much to sniff Buddy but was too scared to get close. She tried several times to sneak a few sniffs then but would get spooked and run away. Eventually she worked up the courage to approach him for first contact. She has been quite friendly toward him with no hint of aggression. 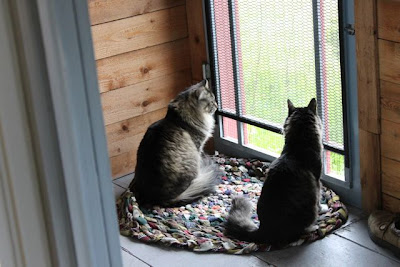 Nahum and Buddy sharing the rug while enjoying the view out the front door. 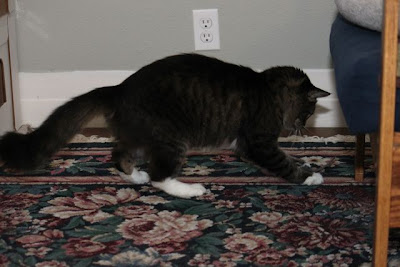 Buddy loves to bat toys around. He doesn't seem to care much which toy, he has a good time. He also loves to play feather and string, which I have am bummed about, because that will be more competition for Nahum.
All this tension is hard, I just want it to be over and to have everyone be friends. I know it will happen in time, I just need to be patient. Initially Willow responded to Theo and Rose with the same nasty hiss, but eventually she relaxed and they became good friends, I trust this will happen again. Nahum has been a huge blessing, he is quite the ambassador. His gentle, non-threatening nature really helps to ease my anxiety - he truly is as his name signifies, a comforter.