Shortly after building the cat house last week, I realized my concept was flawed, the original design assumed there would be only one stray kitty, but we have two! I had built it with two compartments, an entry/dining area and a sleeping area. Once I realized a sleeping cat in the house might not want a visiting cat eating so near, I decided I needed to build a separate dining hall structure. So, that's what I did. 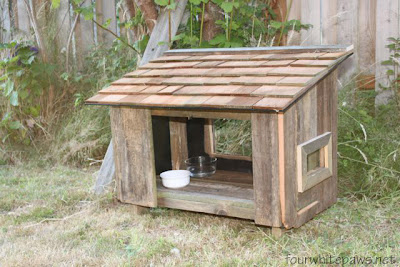 This structure features two plexiglass windows, a small one on the side and a larger one in the back. I added the windows because eating is a vulnerable activity. I figured greater visibility might put the dining patrons more at ease. My main goal was to create a well lit space that allowed for the outside kitties to have a dry place to eat and drink or just to lounge. 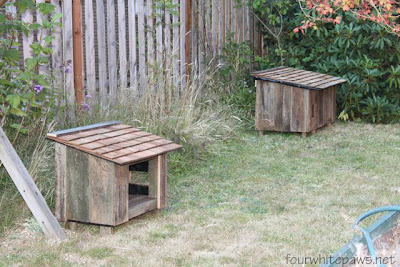 I positioned the dining hall a little ways from the cat house, so if a cat was sleeping in the house it might not be disturbed by another cat having some dinner.

This morning, the dining hall served it's first breakfast. BK stopped in for some Fancy Feast. 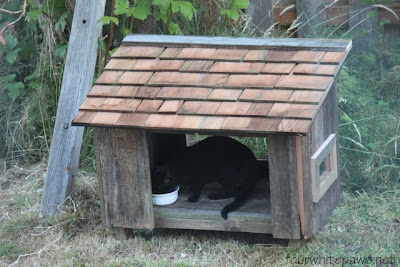 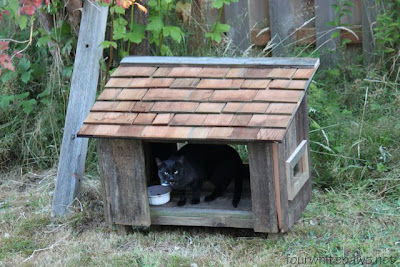 Meanwhile, the cat house is getting some repeat visitors. Both yesterday morning and this morning, when I went out to serve breakfast Crooked-tail kitty came shooting out of the cat house and ran off. I also see BK keeps checking out the house, but I haven't seen her take up residence yet, perhaps because it smells too much like Crooked-tail kitty. 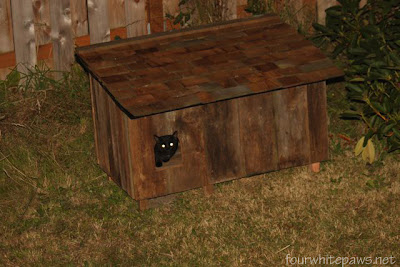 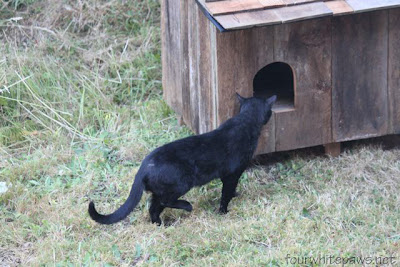 BK this morning looking over the house.

The success of the cat house is very encouraging. Even though it has only been in place for a week, it is already getting nightly patrons. This result has exceeded my expectations and encouraged me to keep improving the village for it's new residents.

After only a week of use, the cat house is scheduled for a major remodel. The plan is to split the one large house into two separate single-unit structures, that way BK and the Crooked-tail kitty can each have their own space scattered around the village green. The smaller size will also make lawn maintenance easier, which is a bonus for the grounds crew. The plan also calls for the new units to have windows and be fully insulated.

There has been some talk of adding heat to the housing units, but further research needs to be conducted on the efficacy of the insulation alone. Rumors of the village getting a gazebo structure for socializing and exercising are unsubstantiated.