Oliver has spent most of his day hanging out on my bed! In fact he's still here, curled up right beside me. He knows how to make himself right at home. 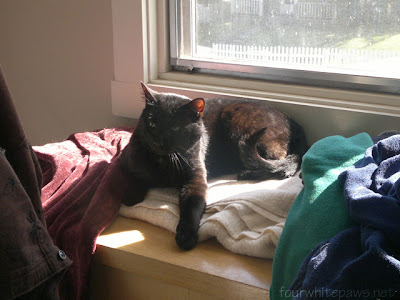 Earlier this morning, when all the boy-kitties were enjoying the sun-soaked front porch, I took a moment to secure them out there and let Oliver inside to explore the house. He quickly darted upstairs, a place he hadn't explored yet. I followed him and ushered him back down stairs. I didn't want him lingering up there because there are too many things for him to get into and if he decided to spray, it would be a big mess to clean up. And of course, he immediately ran back upstairs! 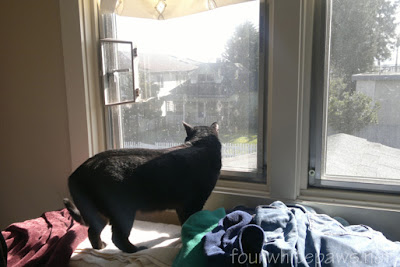 It's funny to me how an outside kitty who finally gets a moment
inside wants to spend time looking out the window at the outside! 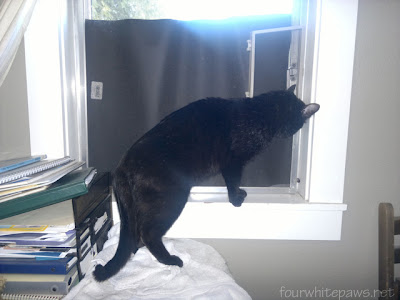 A new perspective! He's usually parked outside this window on the roof, asking to come inside! I covered the window with black paper to keep Buddy from seeing Oliver out there and going crazy.

So this time I decided to hang out with him. After a quick inspection of his new territory he hopped up on the bed and parked on the LL Bean cat mat. That was at 9am this morning and here it is over five hours later and he hasn't left! 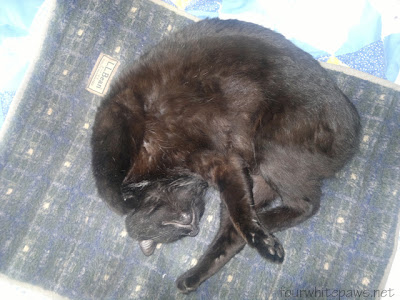 He really loves the LL Bean cat mat. All the kitties actually love this thing!

I got to enjoy my first nap with him and he's asked for quite a few tummy rubs! He's such a sweetie! 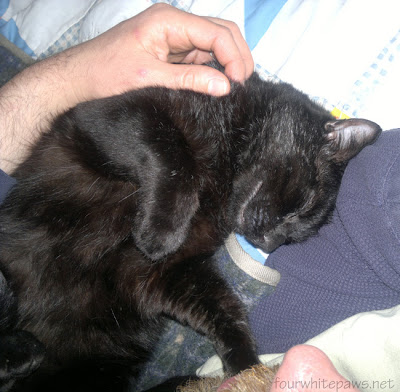 He's doing great, although he growls occasionally at the kitties outside the door or other sounds that make him nervous. The inside kitties are doing great too, they camp outside the bedroom door, trying to catch a glance of him from under the door. 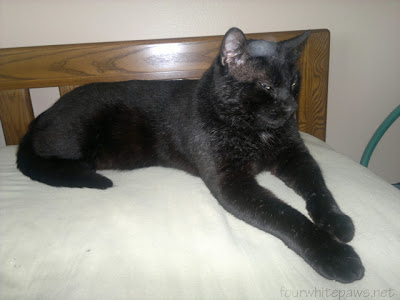 I left Oliver unattended in the bedroom while I had some lunch. As I was preparing my lunch, I let the indoor kitties out on Oliver's back porch, a place they used to have regular access to until it became Oliver's home. They sniffed every square centimeter of that space! So far, I'm quite pleased that there's been no spraying. 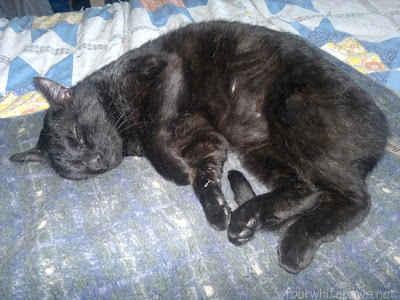 Meanwhile, my fondness for Oliver continues to grow.
A quick update on Buddy. He continues to get better each day. He's nearly back to his old self, which is wonderful!
Posted by The Cat Guy at 6:25 PM