When Max died, we had him cremated. Since then, we have struggled with what to do with his ashes. Ideally, I would spread them in his yard and take comfort that he is now able to freely enjoy his yard unencumbered by a leash and harness.


The difficulty lies in knowing his yard is doomed. Two options exist for the future of our little house and Max's yard. The value of our property lies in the land not the house itself. When we move, our house will be torn down and the land developed into condos. The second option is that it becomes a rental for a period of time and thoroughly trashed before being torn down. Both options make me sad as the house is over a 100 years old and delightful, however, because the house is old and small (less than 1000 sqft), it doesn't fit with today's hunger for super-sized McMansions.


Picturing a bunch of druggies and alcoholics trashing up Max's yard is not comforting nor is picturing his yard being developed into condos. So, we have chosen to hold onto his ashes for now. Previous to today, his ashes remained in the little urn that was provided from the vet's office. I had collected many of his favorite toys, some pictures and the paw impression provided with the urn and had them in a box on my dresser. I tried to keep it high enough so the other cats wouldn't bother his things, but I feared one day his toys would be looted.

I have been wanting a better resting place for Max. Recently, I saw these small wooden memory boxes at Costco. I like the look of this simple box a lot more so than the temporary box I have been using. It arrived earlier this week and today I moved Max's ashes and assorted keepsakes into his new home. Sometime down the road, I still would like to set his ashes free in an area that feels right, but for now, his remains rest in a dignified little wooden box on my dresser. 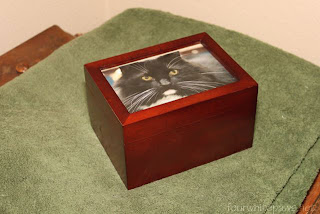 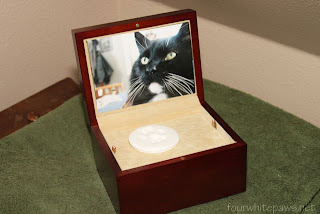