True confession time: I've been holding secrets from you all. But no more. 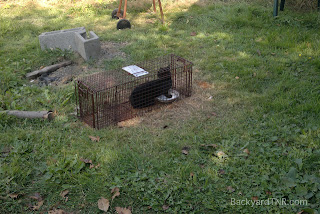 First: I've been heavily involved in a big TNR project. A number of weeks ago I took on the project coordinator position for a collaborative trapping endeavor. The project opportunity was brought to the attention of the Community Cat Coalition, in which I am a member, and I just could not resist! The site is less than a mile from my house, so it's practically backyard TNR!

The project site is a city block of densely packed homes. Originally there were thought to be 14 kittens and a handful of unaltered adult cats. As the project has unfolded the scope has increased and more litters of kittens have been identified. The ages of the litters vary from 5 days to much older. Thus far 7 kittens have already been removed thanks to one of the cooperative residents. Five of those seven are adorable Siamese kittens!! Most of the kittens removed will hopefully be tamed and adopted out. 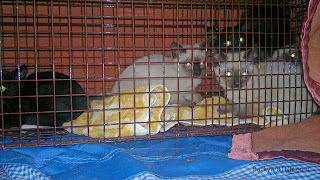 Some of the residents on the block has shared their desire to work at taming some of the yet to be trapped kittens. Hopefully when we are done the population will be thinned a bit by people adopting them and taking them inside! Yea! Even with those off the street, there will still be plenty of cats left roaming the neighborhood.

I have 20 reservations for the spay/neuter clinic on Saturday and 3 more for Monday. Hopefully we meet or exceed those numbers. Most of the kittens that were trapped early have already been altered. 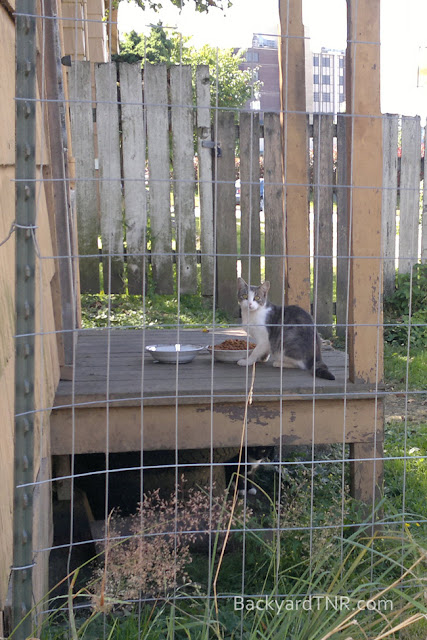 So far this has been a great project. There are some residents on site who have a big heart for taking care of the community cats, so that makes things a lot easier for everyone, especially the cats! Everyone else I've talked to on the block and surrounding houses have also been friendly and sympathetic to what we are doing. Part of the TNR work we do involves educating the public about TNR. So many local residents I have been talking with knew there was an overpopulation problem with feral cats and yet they didn't know what to do about it - that's where we come in! Hopefully word will continue to get out that there are many of us here locally with the knowledge, equipment and desire to make a difference for the community cats.

Second: Along with working on the big TNR project, I've also been assisting another Coalition member on her big TNR project. Last I heard, 22 cats were trapped and altered from this site! There are still several more litters of kittens on the site, but the hoarder folks who own the property refused to allow us on their land, so getting access to those kittens is a challenge. We'll keep working on it.

Third: I was walking to work last week when I saw a "lost cat" poster. I called the lady and offered to assist. I loaned her some traps and got her set up. It was over two weeks from when her cat went missing that someone saw her poster and her cat! I'm thrilled that she has her cat back. This was my second time helping someone find their lost cat and I think there will be many more, it's very rewarding! 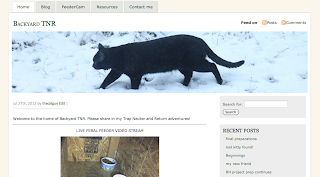 Fourth: I have been working on developing a new website and blog (backyardTNR.com). The focus of this new site is my backyard TNR efforts with Oliver, his family and the other cats that come through as well as my other TNR work in the community. This new site/blog will not replace fourwhitepaws, it will supplement it. As I get more involved in the TNR community, I'll be writing all about my adventures on the new blog. I'll also occasionally mention some of those TNR adventures on fourwhitepaws.

On the BackyardTNR.com blog, I have already started to write about my recent TNR projects including the big one that is going down this weekend.

I am hoping BackyardTNR.com will be a source of information for the global community about TNR both in terms of how it works and what it takes for someone to get involved. I'll keep adding more information to the site over time.

One exciting feature on BackyardTNR.com that I am very excited about are the live video feral cams!! Right now I only have one active, but soon there will be more. So now, you too can keep an eye on the feral cats in my backyard! The camera that is currently up and running is in the feral feeder. 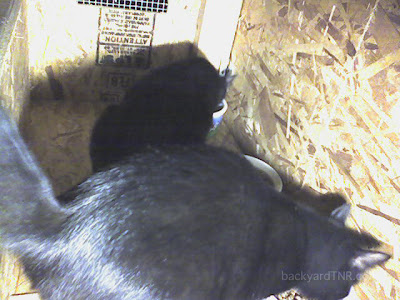 MK and sibling have some dinners 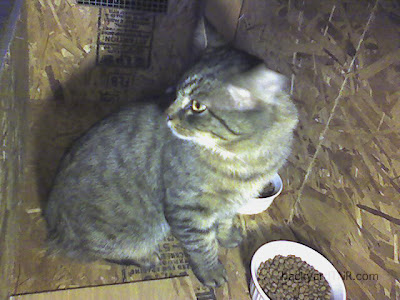 Hopefully my network doesn't get overloaded with everyone viewing the cameras. Don't be surprised if there are technical difficulties as the bugs get worked out of the system. And since the site is still being developed, it will continue to be tweaked over time.

Here is the LIVE stream for the feral feeder, which you can find at BackyardTNR.com: