I have made several recent changes in the house with hopes of helping Willow breathe easier this winter.

The first change was the ventilated litter boxes. This project is still in the design stages. The prototype was installed for only about 15 hours before it was suspended due to an unignorable complaint received (Willow peed on the rug in front of the sink). Perhaps it was too much change at once or the rickety nature of the prototype setup - regardless, her grievance was noted and action was taken.

I was generally pleased with the data gained from the prototype. The permanent installation is currently being planned and parts gathered. Rather than build a large enclosure, I found a jumbo enclosed litter box from Petco that will be outfitted with a ventilation system. That purchase will save a lot of time and work. 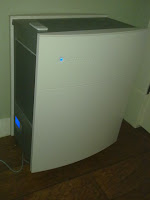 The second change is now complete with the installation of two Blueair Air Purifiers, one on each floor. The hope is that these purifiers will filter out the dust and other airborne particulate matter resulting in better breathing for everyone, but especially my asthmatic Willow.

Laura was concerned about them being too loud, but on the low setting, they are barely detectable. The first night of them being in place, Laura noted feeling less congested. So, hopefully, Willow is experiencing  some of the same benefits. Time will tell.
Posted by The Cat Guy at 1:35 PM