Yesterday I started to hear odd sounds outside, coming from somewhere in front of our house. It was either a weird bird or a little animal. 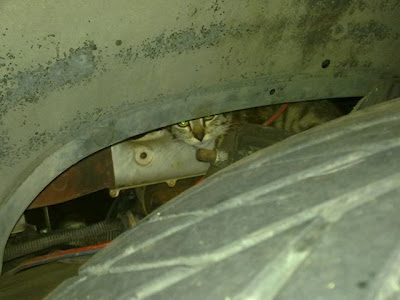 Today, I learned it is a little tiny kitten that is hiding up in the engine compartment of a large SUV parked in front of the house. I have no idea whose SUV it is. The few neighbors I have seen also don't know. I have been trying to lure it out enough so I can grab it.

I tried tuna and it snarfed a bunch up, but when I tried to grab it, it got away. The little guy is now even more scared and tucked itself up further.

My plan is to give it a little time to settle and then try again. With some luck I will be able to snatch it and bring it next door to the vet.

Meanwhile, while I wait, I need to get my other work done, but it is hard for me to settle know this little guy is so miserable.
Posted by The Cat Guy at 8:52 PM