Needing a solution to keep Theo from getting on the gas stove-top, I broke down and purchased

Contech StayAway Motion-Activated Pet Deterrent. It was more money than I wanted to spend, but I figured $40 is cheaper than a trip to the emergency vet office due a burned cat.

A motion sensor is perched atop a canister of compressed air. When it detects motion, the device either makes a loud sound and shoots a quick burst of air or just makes the sound. There is a small switch on the back where you can select the desired option. The idea is that when the cat triggers the device, it will be scared and not return.

The idea behind this product seems great, however I did have some concerns. First was how do I approach the device to turn it off when I want to use the stove? The answer is that it has to be arranged so someone can slip in behind it and flip the switch. My second concern was the impact of the sound on the non-offending cats. What will they associate the sound to when they are doing positive things.

I setup the device on top of the stove and waited. 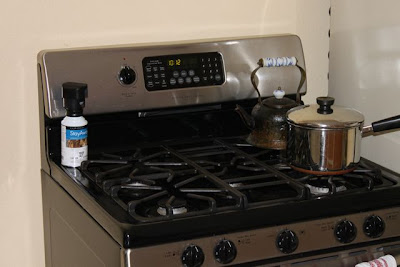 It didn't take long before it sounded off, although the culprit wasn't Theo, it was Laura! She had forgotten it was there until it was too late! The sound certainly scared Nahum and Willow, they scrambled to get far away from the sound and hunkered down.

Later that same day, Theo hopped on the stove and set it off, immediately causing Willow and Nahum to flee for their lives. Theo, however, casually jumped off the stove and wasn't really that phased. He seemed more confused than scared. Rose also didn't even lift her head from her nap.

Theo made a second attempt that evening, but since then I haven't heard him up exploring the stove. I am not ready to call it a success just yet. Do I dare allow myself to be hopeful?!
Posted by The Cat Guy at 10:56 AM