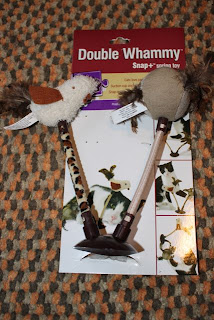 I bought the Double Whammy cat toy at Petsmart thinking it would integrate with the scratching post that I had purchased previously. Petsmart sells a bunch of cat products in what they call their, Petlinks System. The scratching post has a spot on the top of it where it holds a toy, I thought one of these bird things on a springy stick would be great, but it doesn't integrate that nicely.

So, I tried to use the Double Whammy toy as it was intended by sticking the suction cup to a clean flat surface. I even added a little moisture to the suction cup, but it won't stay stuck to anything. I tried all sorts of surfaces but no luck. The suction cup design is very poor. Even if it did work, the connections between the springy stick things and the bird thing are easily separated. When I held the suction cup to the floor with my finger to give the cats a chance to play with the bird part, one whack of a cat's paw and the parts went flying.

For $7.99, I want a toy that will function well and last a while. Sadly, the Double Whammy fails on both accounts. Don't waste your money on this poorly designed product. 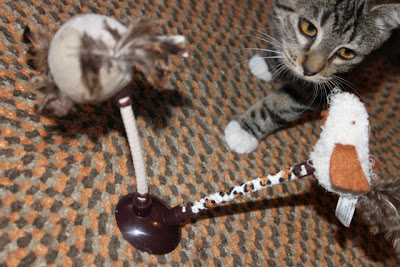