the family pays a visit

Oliver partied the night leading up to the new year with his family. Once again, he brought his family over for a party in the yard! I am thrilled to report that the two kittens are alive and well!! Interesting how the kittens came over on Christmas Eve and now New Years Eve too. 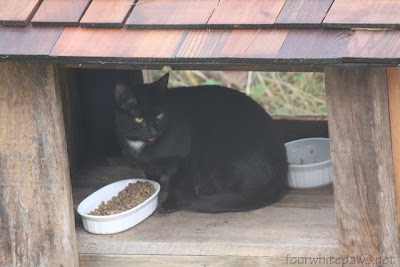 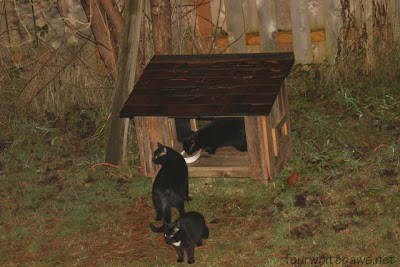 Oliver and his two kittens. 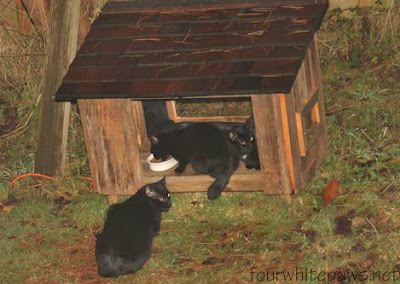 A line forms for chow. 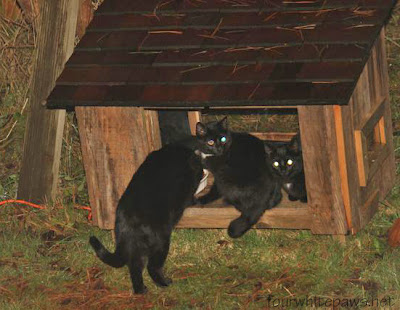 Dining Hall has exceeded it's capacity.
Oliver decides to cut in line!

Amazing how much food four hungry cats can eat. I had to fill up the food bowl several times. When I came out to refill the food bowl the kittens scattered but kept watch on me from a distance, then came right back as soon as I left. This is just how Oliver started to trust in me over time, so I am hopeful the kittens will learn to trust me too. Oliver's response was different than the kittens, he ran up to me all excited like a proud papa showing off his beloved children - what fun.

These kittens look old enough now that I think they can probably take care of themselves. I fear they will be old enough to breed now, so I need to trap them as soon as I can so that I can get them all fixed. No more kittens! Of course, now I have to figure out how in the world I am going to trap Mama Kitty and the two kittens. I might be able to get one or two at a time, but I don't have that many traps!

In other news... I would appreciate purrs and prayers for Buddy. He has not wanted to eat or drink these last few days. We have been working hard to coax him to eat something and have been able to get him to eat little bits. Tried all sorts of foods and he remains rather disinterested. His refusal to eat is reminding me a lot of when Max was going through his CRF. Buddy's going to the vet tomorrow to get an exam and kidney panel.
Posted by The Cat Guy at 12:39 PM