Good news! Buddy's test results all came back looking good. The vet said based on the results of his blood and urine lab work he is in "perfect health." I was thrilled to hear that his kidneys are both functioning at the factory settings, I sure hope that never changes. These results also mean that we don't really know why Buddy is not wanting to eat. She gave us an appetite stimulant to try and if that doesn't do the trick we are to take him back for more extensive testing.

Shortly after the first appetite stim, Buddy was ready to eat! 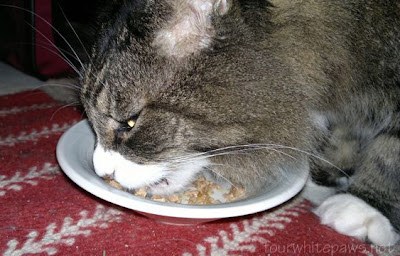 It's been 24 hours now since that stimulant pill and his desire to eat is waning again. He is still eating more than he has in the last few days, but with each meal it seems less and less. Trying to get a cat to eat is an incredibly frustrating experience. It would be so much easier if we had a shared tongue.

Last night, moments after I crawled into bed, I heard the sound of a cat crying out in the yard. I immediately thought Oliver must be tangling with an intruder, so I raced out of bed and scanned the front yard from the window - nothing. I glanced toward the window overlooking the back of the house, and noticed Nahum was hunched on the table, ears flat, gazing intently out the window. I went to see what he was up to and low and behold there was Oliver - parked on the roof of the kitchen, looking in the second floor office window! Moments later, Buddy was on the scene making his intense caterwauling raucous.

Silly Oliver! I went out in the yard to try to get him down so Buddy would settle and I could sleep. 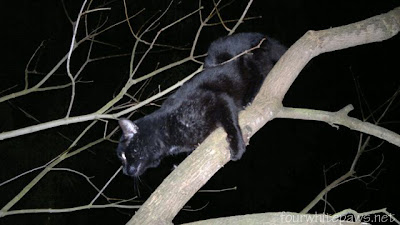 In time, Oliver climbed down the lilac tree he had used to get on the roof.

3:51am this morning, I wake with a start to the sound of Buddy caterwauling again - Oliver was back on the roof! He so much wants to come inside, he keeps seeking out new possible entry points. I'm gonna have to figure out something, because at this rate I won't be getting any sleep!

It is getting to be a regular thing now, seeing the kittens and other black cats eating at the Dining Hall in the evenings. It's hard to keep track of who's who, except for Oliver - he's the largest of them all. 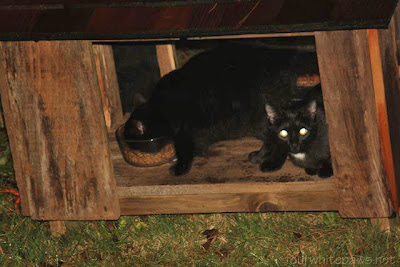 The cat on the right, is one of the kittens. I'm not sure who the other cat is.
It's too relaxed to be Mama Kitty, as she would never tolerate the camera flash. 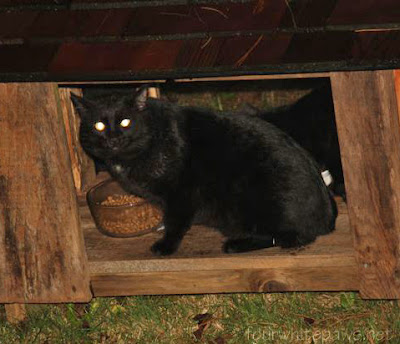 Oliver hanging out in the Dining Hall with one of the kittens.

Oliver is getting to be quite the large cat, especially around the middle. I have been putting out lots of food, so there is enough for the family. Oliver usually gets his share first and he seems to enjoy eating. I'm not sure what to do about this, because if I limit his food it means his family won't get much if any. I've been trying to get him more exercise by playing chase the red dot all around the yard. I would love to hear how others who feed ferals and strays handle this situation. 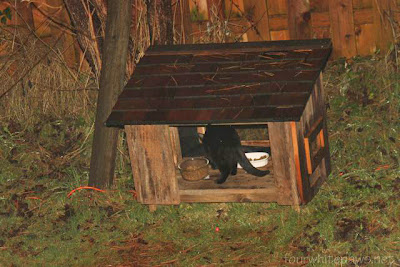 Can you find the red dot?

I use the laser pointer through the window to play with all the visiting kitties. The little red dot shows up really well in the dark and all the kitties had a great time zooming all around the yard trying to get the elusive red dot! It's fun to get to play with them from a safe distance because I know if I were to go out in the yard they would all scatter, except for Oliver of course.