A surprising amount of logistics are involved in running a hobby cattery. With five indoor cats and a colony of outdoor cats, we go through a lot of food. I often wish we could buy in quantities greater than the large bag to reduce the number of trips to the cat food store.

On a recent cat food shopping trip, I was admiring the sealable food storage bins. I have been wanting something large enough to hold full bags of cat food, so I can buy several bags at a time. However, the only place I have to store extra supplies is the basement, which is frequently wet. So that means the storage bin would need to be sealable to keep out the moisture.

I found a 67 quart Airtight Food Storage Container at Petsmart that was decent, but the $42.99 price tag was too much. The next stop was Costco, they had a huge 34.5 gallon plastic chest for $16.49. The lid didn't have a seal, but that was easily fixed with a stop to Lowe's to get some rubber window weather strip for $5.97. Just a matter of applying the weather strip to the lip on the lid, something that took all of five minutes. 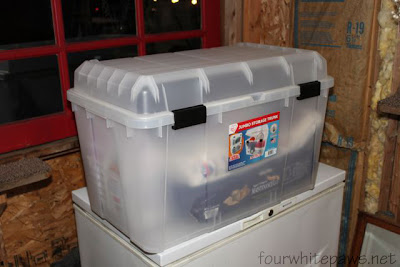 The bin is huge, I bet I can get at least 5 big bags of cat food in there. When Theo learns that we have five bags of cat food waiting for him in the basement, he won't be able to contain himself!
Oliver and his family are now coming by for breakfast as well as dinner and sometimes even lunch too. This morning Oliver's kittens beat him to the warm wet food that I leave out for him in the mornings. That'll teach him to lollygag on the roof! Of course being the cat-codependent that I am, I felt sorry for him when he finally did show up, so I brought him out some too. 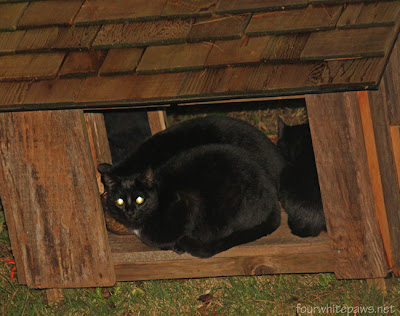 Mama Kitty and her kittens having some dinners this evening. 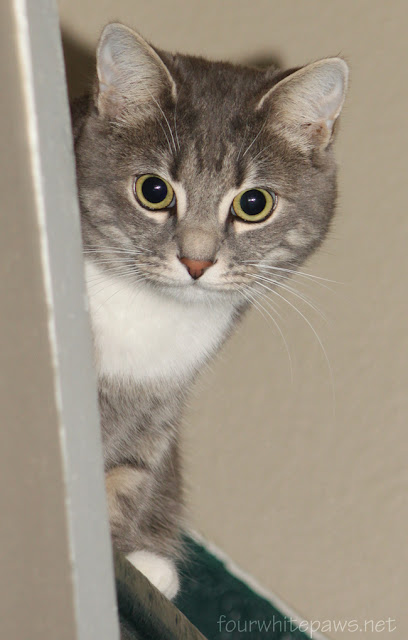 Willow, looking gorgeous as ever!

I've been getting lots of good questions in the comments. Here are the answers...

Buddy - Sweet Buddy is 12 years old. I don't know if Buddy has been pooping, that is a very good question. If he is constipated, that would explain why he's not interested in eating. With five cats it's hard to tell whose producing and whose holding it. But, I will try to keep a closer eye on Buddy in the box. Maybe I should move the network cat-camera to record the litter box action! Yuck!

The vet x-rayed Buddy and found no foreign or domestic objects. Since getting Buddy back in June, I haven't seen him have any hairballs, but that is certainly a good possibility, as he does have medium hair. Amazingly (and thankfully), with all five cats, hairballs are rare. Nahum sometimes gets the hairball goop, but it wouldn't hurt to give Buddy some too.

I am giving serious thought to the possibility of Buddy's condition stemming from too much stress. He certainly is quite anxious about Oliver being around. He patrols the windows frequently. I have been giving Rose Anxitane to reduce her anxiety and it has been working well. If Buddy doesn't improve I may try giving him some too.

Oliver - I did cover up the office windows, so if he's still getting on the roof, the inside cats at least can't see him. Hopefully, he doesn't start making noise up there.

I think this weekend, I'll lock the cats away and invite Oliver to explore the kitchen - one step closer to him becoming inside kitty!
Posted by The Cat Guy at 1:23 AM