For a long time I have been fascinated with the concept of animals making choices. What is the process that takes place that helps them make their choices? I remember many years ago thinking about this as I watched some ducks swim around in a lake. Each duck made it's own choice of which direction to swim in when they encountered the fork in the lakeshore.

One of the many things I love about cats is their wildness. They are way more wild than dogs. It's almost like having a pack of wild and friendly small mountain lions living in your house. Watching the cats interact and do all their various cat behaviors is very fascinating. They make hundreds maybe thousands of decisions every day.
All of the cats love to play ambush. One of them will crouch down behind a shoe or a box or something and wait for an unsuspecting victim to stroll by. Crouched in the pounce position they wait and wait. Eventually he victim comes strolling by. Watching the crouching cat, they make an instant decision to pounce or not. Often they choose to pounce but occasionally they choose not to. What informs such a choice? 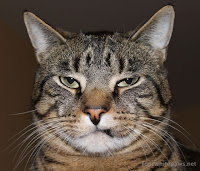 Out of all the cats, Theo is the easiest to read. When human food is being prepared on the kitchen counter, he is fully engaged. He jumps up on the dishwasher, which floats like an island in the middle of the kitchen, to get a good view of the activity. With his nose up in the air, he surveys the air currents to learn more about his potential prey. He then fixes his gaze on the prize and starts scheming. He knows he would need to be quick because a human is immediately present. He weighs the potential consequences of the attempt versus the possible gains. Factoring in the distance, height, and consistency of the prey he calculates his required speed and angle of attack. Then he makes his ultimate choice, to execute the plan or not.
Just looking at him in that moment, I can see all those gears turning in his brain.

"I see the human is expecting me to jump from the floor right at the food, stupid human. I shall jump on the counter from the far edge, out of reach of the human. In one quick and perfectly timed leap, I instantaneously lunge across the counter grab the muffin and flee with the prize to a secure location."

Feline choice seems to involve more than just instinct or innate programming. The cat's personality also appears to be factor. When faced with similar situations, Theo will frequently make a different choice than Willow. I don't worry so much about Willow scheming complex plans to steal food. Her sweet personality informs her decision making.
Posted by The Cat Guy at 10:40 AM

Email ThisBlogThis!Share to TwitterShare to FacebookShare to Pinterest
Labels: Ponderings