a taste for pine needles

Earlier this week I posted about Theo's eating disorder, I would be amiss not to also mention Willow's eating disorder. Her problem is much less annoying than Theo's but it can still be problematic.

Willow has a very polite way of asking for extra food (Laura calls it begging - I call it politely asking). She basically turns on her charms and starts being super-lovey. She will rub her self against your ankle repeatedly, give lots of gentle head butts, and allow all sorts of petting and groping. She typically doesn't care much for attention and generally shies away - but not when she wants a little extra nuggets!

When all of her lobbying for extra nuggets doesn't payoff and she is left without, she decides she had better take matters into her own paws and she heads to the back porch to start feasting on pine needles. 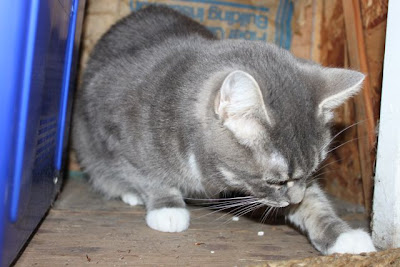 She has become very adept at hunting them. 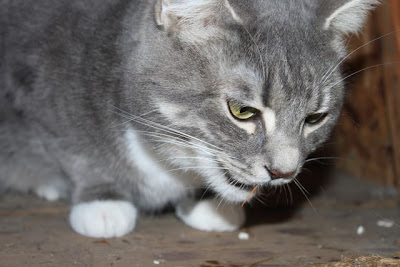 Once captured she then feasts. I have never tried to eat a pine needle, so I can't speak to her taste in snack foods, but I am not thrilled with her choice. I am guessing this was a survival trick she learned when she was a stray and living on the street, fighting to survive. She may have learned that intense hunger pains can be made to go away if you eat enough pine needles.
What's the result of her desire for pine needles? So far, not much except it makes her poops very easy to identify! The needles seem to pass right through her unchanged from their original state. A little while back, I grew concerned when I noticed something about her backside didn't quite look right. I took a closer look and found she had a pine needle sticking out her butt! Then I wondered what to do. Do you try to pull it out?!
I try to keep the back porch swept clean of pine needles, but that is not an easy thing to do!