I absolutely love playing with the cats, it is often one of the highlights of my day. I am quite bummed when time doesn't allow for play. And I'm sure Nahum and Rose are even more bummed than me!

As I have written about before, I am quite dissatisfied with the selection of cat toys at most pet stores. Dogs gets all sorts of interesting toys but cats get the same boring stuff. I also find it difficult to shell out a large amount of money for something that either breaks right away or becomes boring quickly.

I am always looking for new ideas for simple toys I can create for the cats. So, when I ran across Playtime for Cats: Activities and Games for Felines

by Helena Dbalý and Stefanie Sigl at the library, I eagerly snatched it up. I am only a little ways into the book and so far it's great!

One of the ideas presented early on in the book involves taking a cardboard tube from a toilet paper roll putting treats in the middle and plugging both ends with crumpled up newspaper. The idea is that the cat has to figure out how to get the treats out of the tube. You are suppose to start by making it easy by leaving the newspaper barely in the ends, then as they get the idea you stuff it further in the tube making it more difficult.

I decided to give it a go and it was an immediate success! 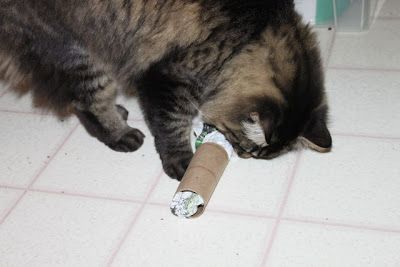 Nahum was the first to give it a try 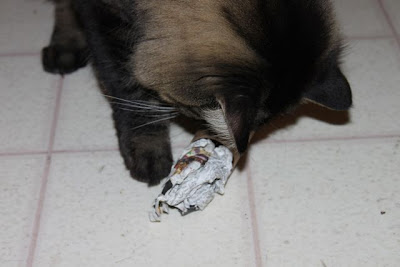 As you can see, the newspaper is barely in the end, making it easy. 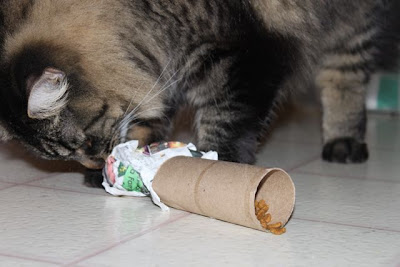 Nahum gets his prize (which for him is more about
the scrunched up paper than the treats!) 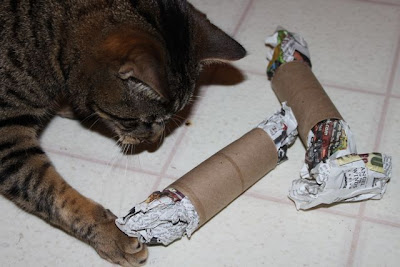 Theo decides to give it a go.
I made several so the cats wouldn't have to share. 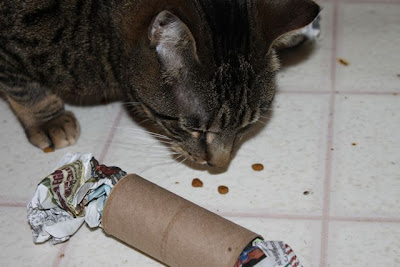 As expected, Theo breaks into it fairly easily. 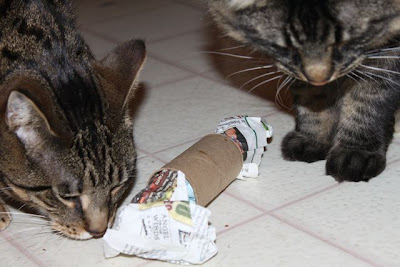 He then goes right for the second one. 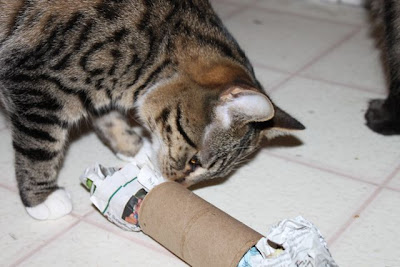 Rose takes a look but decides it looks too much like work. 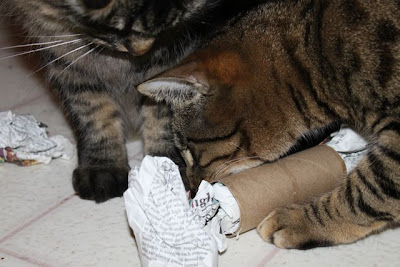 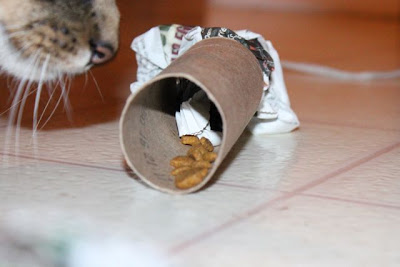 Theo again gets his prize.
The result of this new game was an immediate success. It cost nothing to create and Nahum and Theo enjoyed it quite a bit. Rather than using treats I used what we call "anytime treats" which are a different kibble than their regular food, that way its new and fun for them and less fattening than real treats. I will add this toy to my creative stock and create one every so often for them to play with.