Theo has an eating disorder. He eats his food at lightening speed and then tries to steal the other cat's food. I have been looking for ways to slow him down. Right now I am left to patrol dinner and banish him to the porch after he is done eating but before he pushes another cat away from their bowl.

A friend, whose dog eats to fast, introduced me to slow-feed bowls. There are several on the market.

Most of the bowls are geared for dogs, so they are way too big. I did find a smaller cat-sized one, but it is made of plastic and I don't like to feed the cats out of plastic. Durapet makes nice stainless steel bowls but their small bowl is massive for a cat (7.5 inches!). I think a bowl like this could work if it were cat sized and ceramic or stainless steel. Durapet, how about making a cat-sized slow feed bowl? Please!

Somewhere along the line, I read or was told to try adding marbles or a ping pong ball to the bowl. Marbles scared me, as I had visions of Theo choking on one as he inhales his nuggets. I didn't have a ping pong ball to try, but I did have an old foosball leftover from the college days. It's about the same size as a ping pong ball only a lot heavier. So, I thought I would give it a try. 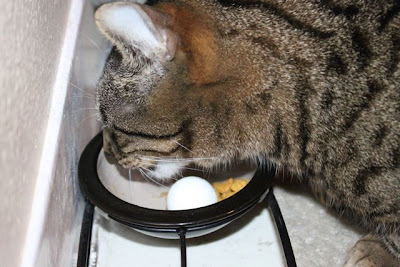 The result? It had no effect whatsoever. Didn't slow him down a bit. I am still wondering about maybe trying two ping pong balls, because they are lighter maybe they will move around more. But even if they moved around more, I don't think it would phase him or slow him down. The foosball didn't really move until he pushed it out of the way to get to the food it was covering.
Has anyone had success in slowing down a cat's rate of consumption?