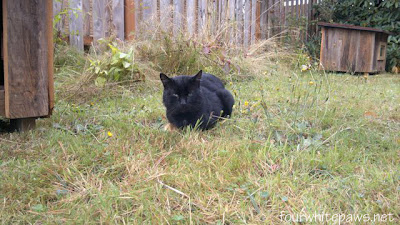 BK's situation has turned significantly for the worse. When I came home this afternoon, I found him in the side yard near the Dining Hall. I thought maybe he wanted some food, so I bought him some. I was right, he did want it and ate it up. However, I noticed he was limping very badly. He was working hard not to use his back right leg. While I was close to him and he was contorting in pain, I observed that he is an intact male.

I decided to further my attempts at capture so I could get him to the vet. My first attempt was to lure him into the enclosed front porch with some tuna and then close the door behind him. Then I would need to figure out how to get him. All was working good, he came onto the porch as planned but he didn't go for the tuna, he smelled one of the low lying kitty shelves then turned and sprayed pee on it. I wasn't expecting that as I hadn't seen him mark much at all outside. Needless to say, that didn't make me happy. I tried to close the door to trap him but he ran out.

My next attempt involved setting up the large wire kennel on it's side. I attached a weight to the kennel door and tied a string to it and brought the other end through the kitchen window. I planted a bowl of tuna and waited. The idea was, when I let go of the string, the door would slam shut and I would run out and secure the door. I was hoping the weight on the door would give him enough resistance that he wouldn't escape.

The moment came. He was in the kennel eating the tuna. I knew as soon as I let go of that string he would panic, so I hesitated but then I let it go. Sure enough he immediately panicked and forced his way through the bottom of the kennel. He darted over to his house and parked. After a few minutes, he limped behind his house, even worse than before.

I talked with Annie, my cat sitter, and the people at the vet's office to see if they had any suggestions. Annie suggested getting some tranquilizer to put in his food to knock him out. The vet wouldn't give me any though, which  I can understand. They suggested trying to trapping him and they provided me with some information about where I might be able to borrow some traps.

So, the plan is to secure a trap tomorrow morning and attempt to catch him. Knowing that he is out there in pain this evening kills me. How can I be comfortable in here when I know he is out there in such pain. It so breaks my heart and yet I don't know what else to do.

I'm also concerned that if I do capture him and take him next door to the vet, how much money am I willing and able to spend on diagnostics and possible treatment for a sick, lame and old stray? And if I do spend all that money, do I just let him go back into the yard again? My fear is that if I do manage to capture him and bring him to the vet, the sensible choice may be to put him down. And again, that absolutely kills me. Certainly leaving him in pain on his own is not a choice I'm willing to live with. Tomorrow may bring some difficult choices.
Posted by The Cat Guy at 10:15 PM