I was eager to feed BK breakfast this morning as I had hoped to meet him at the back door as if everything was back to normal. But that wasn't to be. I served his breakfast, but BK remained in his house. After a few hours, I decided to bring his wet food in and refrigerate it so it wouldn't go bad. (Yesterday's wet food was out for a good 12-hours before he ate it, yikes!)

At around 11am, I saw him approach the Dining Hall, so I grabbed the food from the fridge and brought it out to him. He didn't run away when I approached and he was eager to eat it. He did cough a bit and sounded quite congested, perhaps a clue to his sickness.

All throughout he day, he seemed much more active than the past few days. I still have hopes of catching him and bringing him next door to the vet to get looked over. On the suggestion of Annie, my new cat sitter, I decided to try to bait him into a kennel with some tuna. I attached a string to the door that I could pull from the enclosed porch to close the door when he went inside. I sat on the back porch and waited. 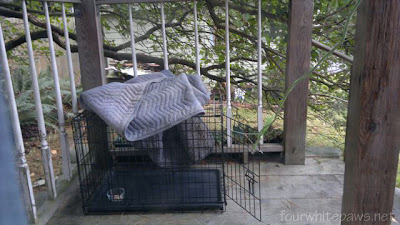 He never came by. I went out for lunch and when I came back the tuna was gone!

Later in the evening, I noticed BK was working on the dry nuggets that he hadn't touched in two or three days. I decided to bring him some more wet food. When I approached him he greeted me with a short hiss followed by several really sad sounding meows. I cracked open the large can of food and spooned some into a bowl which I set a few feet from me. He immediately dived into the food. As he ate I spooned more food into his bowl, my fingers only inches from his face. He didn't seem to mind me being so close. I was tempted to try to touch him, but I decided not to rush first contact. 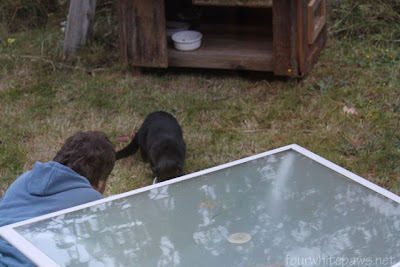 Laura snapped a photo from the window but unfortunately the outdoor table blocked some of the shot.

After dining, we hung out together in the yard for awhile. I talked gently to him while he lay hunched up under a planter. He didn't move for quite a long time. Seeing his hunched and uncomfortable pose, reminded me of Max, near the end of his battle with Kidney failure when he would lay just like that for hours. While hanging out with BK, I also noticed he prefers to have his eyes closed, which makes me wonder if it hurts to have them open. Lots of reasons I want my vet to give him a look over even though he seems to be improving.

I'm contemplating buying a trap, although at the rate BK and I are going, we may be fast friends sometime next week - maybe then I could just carry him over to the vet's office. But even so, I figure there will probably be other stray cats in the future, and it might be nice to be able to capture them to get them needed medical care. Knowing nothing about traps, I am starting my research. Anyone have any recommendations regarding what type of trap to get? 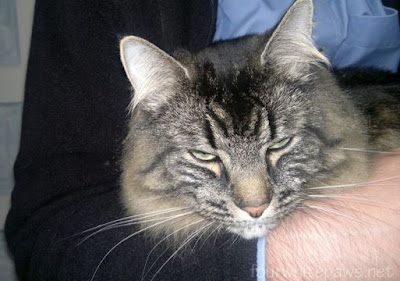 BK wasn't the only cat that had my attention today. Nahum again decided he needed some mid-day lap snuggles and so he parked in my lap for a long long time. We snuggled and snuggled but eventually I had to get back to work! Later in the evening, as I was again working, Nahum dragged a toy over to me, dropped it at my feet, looked up at me and meowed. He was very sweetly asking me to play with him. He's so sweet, I am so privileged to have him in my life.

A little while back I mentioned that I bought some Feliway to try. I was hoping it might calm Buddy so he wasn't quite so grumpy with the other cats. I didn't notice when the Feliway pheromone had run out, except I did start to notice a big change in Willow's behavior. Without the Feliway, she turned into quite the Willow Monster. She creates situations where she can sneak up on Buddy and hiss at him. She seems to take pleasure in causing him grief! I just inserted a new bottle of Feliway, Willow Monster be gone! Bring back my Sweet Willow!